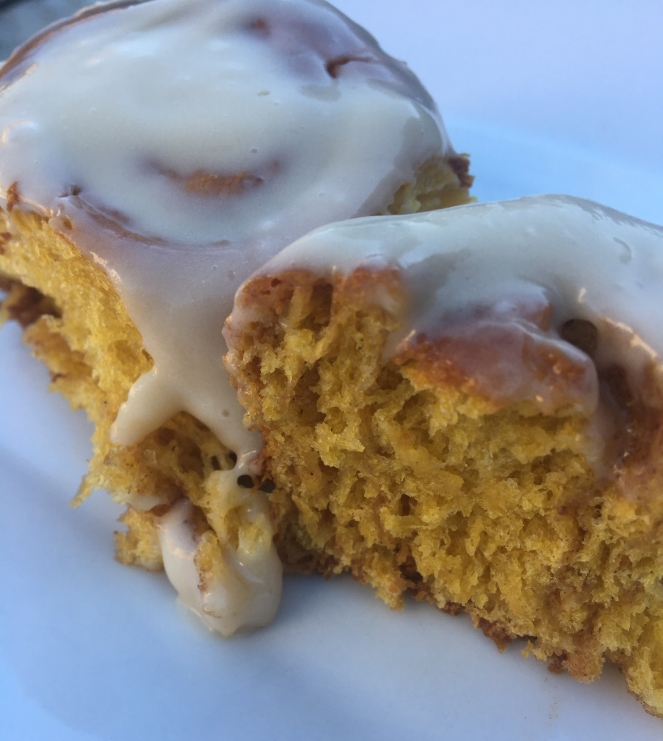 Pumpkin may be a fall staple, but I’ll be the first to sign the petition to have pumpkin recipes all year long. These pumpkin cinnamon rolls are a Huber Thanksgiving break tradition, but should really be made anytime of the year.

It can be tempting to unroll a pack of premade cinnamon rolls (I do it too), but once you taste the homemade version, it’s hard to go back. Yes there are a couple of rising times, but the dough is so easy and non-tempermental, it’s hard to complain. You can even prep them the night before and then simply pull them out of the fridge the next morning for an hour to rise before baking.

The ingredients list of the Pillsbury cinnamon rolls is pretty cringe-worthy including things like partially hydrogenated soybean oil, corn syrup solids, monoglycerides, polysorbate #60, and Red 40 (why?). Cinnamon rolls are definitely a special treat, but I feel far less bad about eating them knowing everything came from our kitchen.

Warning: these go fast. Double the recipe, including the frosting, and divide between two pans if making for a crowd.

For the vanilla cream cheese frosting: